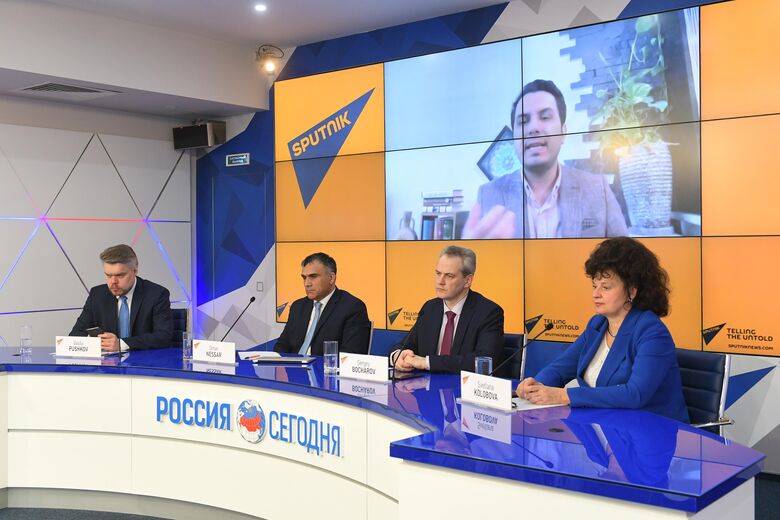 Participants in the first event, dedicated to the integration processes between Russia and the Shanghai Cooperation Organization (SCO), included Rector of the Altai State University Sergei Bocharov, Dean of the Higher School of International Relations and World Politics of Nizhny Novgorod Linguistics University Svetlana Kolobova, Director of the Center for the Study of Modern Afghanistan of the RAS Institute of Oriental Studies Omar Nessar, Editor-in-Chief of the IRNA Foreign Languages Service Abas Aslani, Head of the Kabar News Agency Analytics Department Ermek Abdrisaev, Producer of the CGTN Russian Service, Head of the China-SCO News Exchange Platform Yang Yijun, Senior Lecturer at the Department of Theory and History of International Relations of Yeltsin Ural Federal University Ksenia Muratshina, Chair of the Journalism and Mass Communication Department of the University of Peshawar Faizullah Jan, Editor-in-Chief of the Sputnik International Information Agency and Radio Representative Office in Kazakhstan Dinara Dosmukhametova, and Sputnik Kazakhstan columnist Alibek Tazhibayev. The session was moderated by Director for International Cooperation at Sputnik News Agency and Radio Vasily Pushkov.

The experts on media, education and politics discussed the current state of affairs at the SCO, the issues faced by the organization and its development prospects.

"Universities, as carriers of multidisciplinary competencies, interact with businesses in the real sector of the economy; moreover, universities have broad horizontal ties with SCO universities. With this foundation, we can unite all our capacities for analytical work and build long-term strategies," he said.

Dean of the LUNN Higher School of International Relations and World Politics Svetlana Kolobova also spoke about universities' importance in shaping the international image of the country and added that today it is "necessary to step up the Russian universities’ interaction, including with the member countries of the Shanghai Cooperation Organization” as part of the national education export strategy.

In addition, the experts at the session touched upon the information cooperation within the SCO and assessed the role of cultural and media projects in the integration processes within the SCO.

Editor-in-Chief of the IRNA Foreign Languages Service Abas Aslani shared Iran's experience and especially stressed that it was the media that defined how events in the world were reflected in people's minds. Head of the Kabar News Agency analytical department Ermek Abdrisaev proposed creating a single SCO information center as a mechanism for effective information exchange and verification of news on the international agenda.

Dinara Dosmukhametova, Editor-in-Chief of the Sputnik International Information Agency and Radio Representative Office in Kazakhstan, noted that the SCO's presence in the information field must not be limited to major political events but must also be dedicated to cultural events. Her colleague, Sputnik Kazakhstan columnist Alibek Tazhibayev, added that the cultural and humanitarian discourse has the largest range of growth points, since it is the area with the fewest contradictions in different countries and cultures of the world.

Producer of the CGTN Russian Service Yang Yijun spoke about China's experience in information exchange with the SCO member countries and noted: "When we speak about the SCO in China, we do not only mean the organizational structure. We have the concept of the Shanghai spirit, which means mutual trust, mutual benefit, equality, respect for the diversity of cultures and the desire for common development.”

Moreover, the event participants also discussed in detail the bilateral cooperation of the SCO member countries. For example, Chair of the Journalism and Mass Communication Department of the University of Peshawar Faizullah Jan expressed hope that the SCO bilateral cooperation mechanisms will help counter the threats to the security of some countries in the region, such as terrorism, religious extremism, and climate change, more effectively.

Director of the Center for the Study of Modern Afghanistan of the RAS Institute of Oriental Studies Omar Nessar talked about Afghanistan's role and significance in the context of the changing world and expressed hope that the SCO member countries would develop a single approach to Afghanistan’s problems in order to stabilize the situation in the country and the region as quickly as possible.

Senior Lecturer at the Department of Theory and History of International Relations of Yeltsin Ural Federal University Ksenia Muratshina mentioned the areas of SCO cooperation that were not so widely covered by the media, such as science, sports, tourism and especially healthcare.

It is planned to continue the series of roundtable discussions with meetings with experts from BRICS and ASEAN, as well as from Latin America, Africa and the Islamic world. The project is aimed at accumulating various points of view on the current problems of integration processes and Russia's participation as well as at comprehensive approach to analyzing them.