Nuremberg: Casus Pacis exhibition opened on Wednesday, December 8, 2021, at the Central Armed Forces Museum of the Russian Federation in Moscow 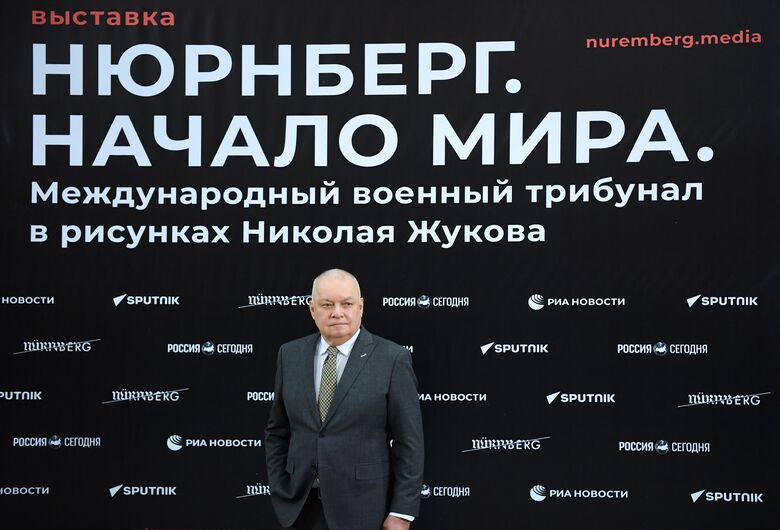 Nuremberg: Casus Pacis exhibition opened on Wednesday, December 8, 2021, at the Central Armed Forces Museum of the Russian Federation in Moscow. As the centerpiece, it displays for the first time The Shadows of the Past (Black Collection), a series of portraits of Nazi criminals by painter Nikolai Zhukov, who covered the Nuremberg trials, RIA Novosti correspondent reported from the opening ceremony.

The series on display at the museum includes portraits of 21 defendants at the Nuremberg trials, except for Martin Bormann, tried in absentia, as well as two sketches depicting the tribunal’s proceedings in white pastel on black paper.

Nikolai Zhukov left us what can be viewed as a creative, political and moral legacy. It [Black Collection] has never been shown before, because people thought: ‘Wouldn’t showing the portraits of criminals perpetuate their memory?’ On the other hand, showing the devil’s true face makes sense. We need to see these people to draw a line, as Nikolai Zhukov believed, under the intellectual standoff [between the Nazis and the USSR and its allies].

He went on to say that Zhukov, who is known for his paintings of women and children, as well as impressionistic works, added an unusual feeling of “hatred” to his drawings of the Nazi criminals.

“We can see a concentration of hatred, a righteous feeling of hatred towards those people, who were the greatest, if the word can be used in this context, war criminals of all times,” Mr. Kiselev pointed out.

In his remarks, Mr. Gorny noted that in his portraits, Zhukov surpassed other artists and even photographers in capturing the inner world of the Nazi leaders.

“Many reporters and painters congregated in the Nuremberg courtroom 70 years ago, and Nikolai Zhukov was among them for Pravda newspaper. He accomplished a remarkable feat by producing hundreds of courtroom sketches of the Nazi criminals, showing us like no one else how these people looked, and what they were experiencing on the inside. A photo would not have been as striking and expressive as his sketches were,” Mr. Gorny said.

Television presenter Ernest Mackevicius, who also attended the ceremony, noted that the Nuremberg trials “can be described as a ‘vaccination certificate’ of sorts, since we can present these verdicts to those who managed to forget what this was all about.”

“For more than 70 years, this was enough, but today we have been noticing that the ‘vaccine’ has become less effective, which led to incredible things… Today’s event is like a booster shot, a preventive measure [to combat the rehabilitation of Nazism],” Mr. Mackevicius pointed out.

Nikolai Zhukov spent 40 days at the trials, working both inside and outside the courtroom. He produced 250 sketches on the tribunal in Nuremberg, as well as upon his return to Moscow. Created in 1971, The Shadows of the Past series summed up his work. For the first time, the general public will be able to see ten original graphic portraits from this series at the premiere exhibition.

Historical documents from the Nuremberg trials on the defendants accompany the portraits: charges brought against them, evidence of their guilt and what the criminals said to exonerate themselves, as well as the court’s verdict and their fate after the trials.

These documents include transcripts of the proceedings, indictments, speeches by the prosecutors and witness testimonies, final speeches by the defendants, the verdict and the allocutions of the criminals prior to their execution, as reported by journalists.

The Nuremberg trials were a series of tribunals to prosecute the leading Nazi war criminals. Often described as the “greatest trial in history,” it took place in Nuremberg, Germany, from November 20, 1945, through October 1, 1946, as part of the International Military Tribunal. It was established under the August 8, 1945, London Agreement, signed by the governments of the USSR, the United States, Great Britain and France, and joined by 19 other allied countries.

The tribunal reviewed the cases of 24 defendants, who were all senior Nazi officials. All 403 court sittings were public. The international press extensively covered the trials, with radio providing live broadcasts from the courtroom.

The court found the defendants guilty of grave offences against peace and humanity, and sentenced 12 of them to death by hanging, while others received lengthy prison terms, including life sentences.

The Nuremberg trials drew a line under World War II, and lie at the foundation of today’s world order, primarily in terms of human rights and international humanitarian law.