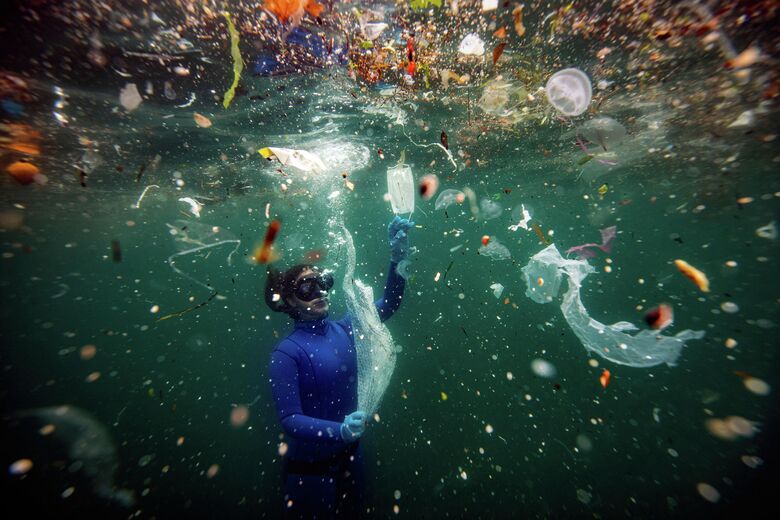 The Andrei Stenin International Press Photo Contest has announced the winner of the Grand Prix. In 2021, two entries won the main prize of the contest: “M+T,” a photo series by Mary Gelman, photographer from St. Petersburg, and Turkish reporter Sebnem Coskun’s single photo “New danger to life below water: COVID-19 waste.” The announcement of the Grand Prix and prizes for the shortlist participants took place as part of an online ceremony in the Rossiya Segodnya Multimedia Press Center. Rossiya Segodnya is the contest organizer.

Photography is the most sincere, conservative art form of our time. To photograph war or civil conflict, you need to get close to the protagonist. This is how Andrei Stenin found himself in almost every hotspot in the world.

Both pieces chosen for the Grand Prix are profound and strong stories told with the language of photography.

“M+T” is a touching story about love between an elderly couple with Down syndrome living in the Svetlana social village, where people with different mental and physical developmental disabilities can live freely together with educators and volunteers. Love has no boundaries – this is the main idea of the series, on which Mary Gelman worked in the Leningrad Region for more than a year.

Speaking about her participation in the contest, the photographer emphasized: “For me, taking part in the Stenin Contest is an opportunity to raise awareness of a social issue and share my vision; it means an opportunity for a dialogue. Every year I send my works to this contest with the professional international jury, because it is an excellent platform for sharing my vision, with notable financial support for young photographers and a high-quality approach to exhibiting the winners”.

The 2021 Grand Prix was also won by the single photo by Turkish photojournalist Sebnem Coskun, in which freediver Şahika Ercümen, a participant in the UN Underwater Development Program, dives into the Bosphorus. Describing her work, Sebnem stressed she wanted to make the shooting special.

She says: “I wanted to express my opinion and point out the problem. For many years I have been working on marine pollution with plastic waste and microplastics. Even before the pandemic, we could not cope with the huge volume of plastic in our ecosystem, and it has only existed for 60 or 70 years. The photo was taken in the Bosphorus. I was going to look for trash during the dive. But there was no need to look for: it was everywhere”.

Winners of the 2021 contest were also announced at the online ceremony. Describing the winning works, jury member Ruth Eichhorn (Germany), independent curator and photo editor, former photo director at GEO Germany, said: “For many reasons, 2020 was a really unique year in history... So my expectations were lower than usual. Nevertheless, the very first photographs charged me with enthusiasm. Storytelling will always be relevant. It can change and develop, but it will never die. Every generation has something to say. Photography is a universal language of our time that requires no translation”.

Ruth also noted that “the selected works do not just review global events. They are a photo journey, a visual puzzle paying tribute to photographers and their point of view.”

The first place in the Top News category went to Indonesian photojournalist Joshua Irwandi and his photo “The human cost of COVID-19.” This is a poignant visual epitaph to all victims of the coronavirus pandemic. The series by Indian photographer Chandan Khanna “Dissent” about protests in Minneapolis, USA, in the spring and summer of 2020 won the first place in the same category.

The intricate photographic pattern from the 2020 Vasaloppet China cross-county ski race by photojournalist Chang Xu was the best single photo in the My Planet category. In the series, the winner was the documentary chronicle of an unprecedented humanitarian catastrophe of the last 25 years, titled “Locust invasion in East Africa” by Spaniard Luis Tato, many-time winner of the Stenin Contest in various years, including the 2020 Grand Prix.

In the sports category, “Parkour on rubble” by Syrian reporter Mouneb Taim was the best single photo. The winner in the series was the story by Russian photographer Darya Isayeva, “Home Olympics,” which consisted of a remote photo session with athletes who did not stop training for the Olympics while staying at home during the lockdown last summer.

The first places in the Portrait. A Hero of Our Time category were given to photojournalists from Russia and India. Sergei Bobylyov’s photo “Faces of the time” came first in the single photo category: a token of endless respect for doctors saving people during the coronavirus pandemic. The best story in series was the black-and-white photo essay by an independent photographer from India Sharafat Ali, “Kashmir: A disputed legacy.”

The full list of the 2021 contest winners can be found at stenincontest.ru/stenincontest.com. Chosen works by the winners can also be seen on Gogolevsky Boulevard in Moscow in the format of a street exhibition in the first two weeks of October.

As per tradition, special prizes for participants were established as part of the contest. This year works in three categories were singled out: Top News, My Planet and Portrait. A Hero of Our Time. Leading international media such as the Shanghai United Media Group and the pan-Arab media holding Al Mayadeen TV as well as one of the world’s largest humanitarian organizations, the International Committee of the Red Cross, are these categories’ partners.

The International Committee of the Red Cross’ special prize For Humanitarian Photography in the Top News category went to Joshua Irwandi for his single photo “The human cost of COVID-19” and Alexander Yermochenko’s series “Europe’s bleeding wound.”

The Andrei Stenin International Press Photo Contest, organized by Rossiya Segodnya under the patronage of the Commission of the Russian Federation for UNESCO, aims to support young photographers and draw public attention to the challenges of today’s photojournalism. It is a platform for young photographers – talented, sensitive individuals open to all things new – to highlight people and events surrounding us.