The release of the VR investigative quest was timed to the 75th anniversary of the end of the Nuremberg trials, the biggest court trial of the 20th century 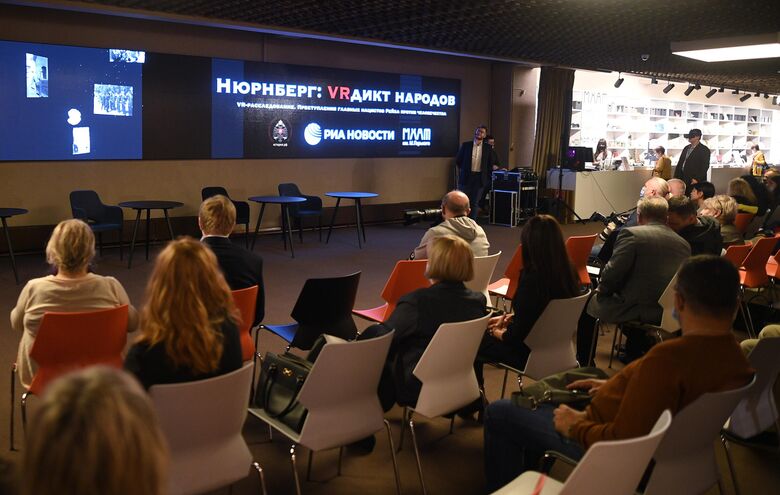 A unique fusion of journalism and gaming, VR Investigation: Crimes of Senior Nazis Against Humanity, marking 75 years since the end of the Nuremberg trials, the biggest court proceedings of the 20th century, was presented at the Gorky Moscow Art Theater, a RIA Novosti correspondent reports.

This VR project was created by RIA Novosti in cooperation with historians and actors of the Gorky Theater, with the support of the Russian Military-Historical Society. Players in this documentary VR quest will look for evidence to substantiate the charges against the tribunal’s main defendants ‒ the Nazi criminals and leaders of the Third Reich.

The project is designed to educate the younger and VR-savvy audience about this key historic event that laid the foundation for the modern world order.

Rossiya Segodnya Director General Dmitry Kiselev noted that the Soviet Information Bureau (the predecessor of Rossiya Segodnya) was founded on the third day of the Great Patriotic War in order to use new technology and new mechanisms to deliver meaningful messages to the public. At the time, the mechanisms were the voice of anchor Yury Levitan, the texts written for him and the radio that broadcast information. Today, Kiselev said, VR is the cutting-edge technology that “activates the receptors which have not yet been numbed by television, film and the internet.”

“Somebody may use the same technology to cause harm but we take advantage of this new environment to create more good. We give young people a choice,” Kiselev stressed.

Artistic Director of the Gorky Moscow Art Theater, director Eduard Boyakov, said that the theater was selected for the project thanks to productions in its own repertoire that address similar topics. Last year, the theater presented a play called The Nuremberg Waltz focusing on an analysis of the Nuremberg trials.

“There are things that need a truly serious deep comprehension. For us, the memory of the Great Patriotic War is the most important and sacred matter in the history of our country. We survived this most horrendous and harrowing war in the history of humankind. We came out as victors. Not only did we win but also we secured our victory with a certain act. Winning means installing one’s banner; it means, historically, taking away and burning the enemy’s banners. These symbolic acts gain meaning when there is actual serious and deep comprehension by scholars and artists,” Eduard Boyakov said.

Participants in this VR project will travel into the past of the defendants and look for proof of their horrible crimes against humanity in their mundane pre-war surroundings. They will collect the dossier that eventually substantiated the verdict of the Nuremberg trials in 1946.

Millions of teenagers and other VR users spend so much time in virtual reality. Since switching to this format of consuming information, they are no longer interested in other formats.

She added that, according to modern research, information received through VR will be remembered much better than when watching or reading.

“We know very well how important and relevant this topic is, especially today. We all know that, with all the attempts to distort history and the historical truth over the past few years, it is crucial to deliver truthful and authentic information based on documentary evidence and facts,” stressed Igor Morozov, Director of the Project Department of the Russian Military-Historical Society.

The team worked on the project for several months. They studied thousands of photographs and historical footage, documents and antiques catalogues to recreate furniture, devices and interiors. The creative team researched the criminals’ biographies by reading not only history textbooks, but also their interviews, psychological portraits and the accounts of people who knew them personally. The goal was not simply to accuse the Nazi criminals but also to understand how and why they became villains. Hundreds of unique 3D objects were created for the documentary quest. Hundreds of unique sounds were hand-picked and synthesized (some based on archive audio recordings) to create a realistic sound environment.